Every other Monday night, we scurry to get a build of Painted Waters ready for Jack to test. Some days it slips into Tuesday. Some days it’s still loading onto itch.io while we sign on to Zoom and chat with Jack. 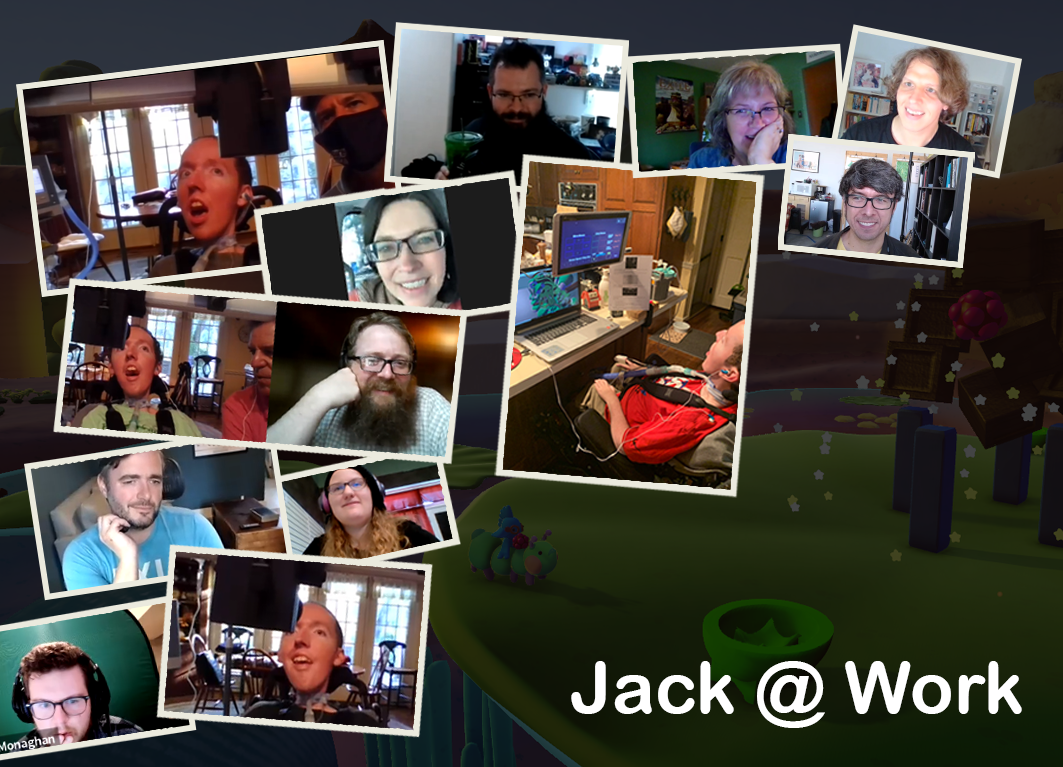 Game devs are used to late builds and game-breaking bugs in their playtesting. But Jack isn’t a game dev. Still, he’s gracious. As we wait for the demo to load, he asks about everyone on the team who isn’t on the call. “How are they doing?” He asks about our kids, remembering each of their names and their interests. Sometimes he gives us an update on their birthday countdown, “23 days until Zoe’s birthday.” He often makes jokes and tells us about his adventures that week: a new power chair, or special blue-blocking glasses for the computer, a haircut, a zoom call with cousins, or an excursion to the Longwood Gardens or the King of Prussia Mall. He teases his dad, calling him a knucklehead. And I remember the first few calls with Jack where I couldn’t understand his speech, the way it bounced around his trach. But now I do, and it makes me feel proud every time that I can effortlessly chat back and forth with him. Some days he sings. Before Jack, I’d never heard anyone with a trach sing.

Some days the demo works well, and Jack plays everything, “Yeah baby! This is fun. I like it!” Some days everything that can go wrong does, and Jack gets stuck. “This is frustrating.” But his frustration is a gift. It means we’ll fix the frustrating moments in Painted Waters before any kids with SMA ever play it. Jack feels frustrated, so they won’t have to. He loves the children he meets with SMA. He remembers their names and their birthdays. He befriends their families. He wants Painted Waters to be great for them, and so do we. So every other Monday night, we scurry to get a build ready for Jack.

On Monday, October 4, we got an email letting us know that Jack was in the hospital. His family was preparing to say their goodbyes. We knew Jack was medically fragile. We knew he’d exceeded his life expectancy by 25 years. But, he was so full of life, joy, and spunk that we couldn’t imagine anything changing that. However, with the news still reverberating through our team like shockwaves, we could imagine what it was like to sit at the hospital and say goodbye to Jack. There are some hard moments in life that you can only imagine if you’ve experienced them – if you’ve deeply loved someone like Jack: someone whose disabilities make every part of their life more challenging, but whose love, joy, patience, and strength makes every part of your life more rewarding, someone who naturally becomes the center of everything you do, so saying goodbye to them feels like starting your life over. Loving a person like Jack is a joy and a sorrow that shakes you to your core; it changes your perspective on everything. It makes you want to build worlds in their honor. We did that for our son Joel, and now, without really meaning to, we’re doing it again for Jack. We knew him, and we loved him, and he mattered, and he’s gone.

We didn’t make a new build of Painted Waters for Jack this Monday. Jack passed away on October 5th. We already miss him. It’s hard to build new levels into the game that Jack won’t get to play. We have always said that you should “design for the one.” We don’t believe it’s enough to build out accessibility features from a checklist. You need to have a player in mind. Think about what will serve them. Worry about what will block them. Care about what they care about. To design for someone, you need to know them. To create a world for someone, you need to love them. Jack was our “one.” We were designing Painted Waters for him, trusting that everything we did for him would serve the larger group. He was excited to help because he saw the game as a gift he could help give the SMA community. We will think of him every time we build out a new demo of the game. We will remember him every time a smile crosses the face of a playtester because we know he wanted this game to be fun for them. Our hearts will shout, “yeah baby!” with every prize earned by a child in Painted Waters. Continuing to make a game that Jack would be proud to share with his SMA friends is the best way we can honor the life of a young man who inspired us and gave us a reason to try harder. We won’t scurry to make Monday night builds for Jack, but we’ll scurry to put in a fountain and a zipline because he loved those things, and when you are designing for the one, you love what they love. Jack continues to be our one; death isn’t strong enough to change that.