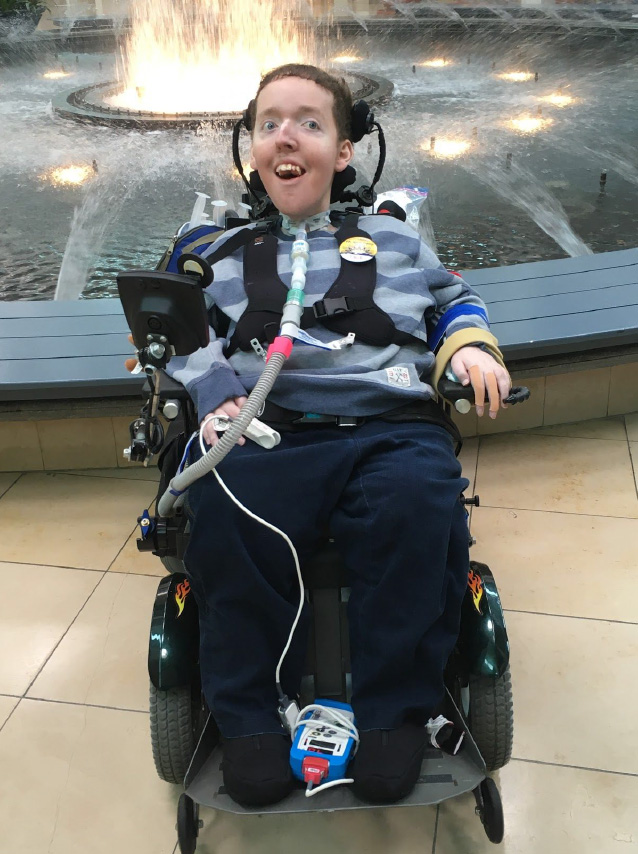 This is Jack. Jack has a condition called spinal muscular atrophy. Over time, SMA has affected Jack’s ability to control his muscles, including his ability to breathe independently. SMA hasn’t stopped Jack from having a job, connecting with his friends on social media, or doing what almost all 25-year-old men love to do, play video games.

When Jack was little, his parents made his first computer setup which enabled him to play games on his own. They created slings for his arms so that he could hit the buttons to interact with the Living Books he liked to play, without having to support the weight of his arms. Once Jack had played through all the Living Books, he entered the world of Freddie Fish, Spy Fox, Pajama Sam, and all the other memorable characters from Humongous Entertainment’s  popular video games.

As Jack grew, his physical limitations increased, but his parents kept learning new ways to help him play the video games he loved. His dad, Al Freedman told us about all the trips they took to GameStop, searching for games they hoped Jack could play. They’d look at the video game cases, wondering how much Jack would be able to play the games on his own, but they would never know for sure until they purchased the games and took them home. More often than not the games wouldn’t work for Jack, but since they didn’t have a better system for finding accessible games, they always found themselves returning to GameStop to start the search over again.

Now, Jack plays video games using eye-tracking. He’s learned what games work best for him and found some favorites. He’s played every Nancy Drew and Agatha Christie game, always on the hunt for a new Hardy Boys or Sherlock Holmes mystery game to try out. However, even his favorite games have moments that block his progress. People love games because they get to make the choices themselves; nothing kills the fun faster than when Jack has to ask his mom, dad, or nurse to help him pass a level simply because the speed of his eye-tracking input wasn’t fast enough to beat a timer in the middle of a game.

When we watch Jack play video games, it makes us want to work even harder to create video games that gamers like Jack can play with their friends and family, without assistance.

As we keep developing Painted Waters for children with SMA, we’re counting on gamers like Jack to ensure Painted Waters is a fun game, not a frustrating game. We’ll also be enlisting the help of gamers in our Playability Initiative community to help us solve design challenges to make our games more fun and inclusive for everyone.

Jack is our first collaborator from the SMA community. His column on the Playability Initiative Blog will focus on sharing the games he is passionate about with all of you. Tomorrow, we’ll share Jack’s first post where he tells us about a video game he wishes he could play.