In March, we issued our most difficult one-button design challenge yet. So, we weren’t at all surprised when we had only one entry this month. However, the caliber of the entry we did receive was so high that we are really excited to share it with you.

We were thinking through what kinds of video games we had not yet thrown down the one-button gauntlet with, and we decided that a complicated sports game that relies heavily on timing would present a unique design challenge that couldn’t be solved with a simple scan and select mechanic. And when we thought of complicated sports games that rely heavily on timing, we immediately thought about a nostalgic favorite of ours, NBA Jam. Of course, like many of our favorite games from decades ago, NBA Jam isn’t widely available now, so we picked a more recent title that shared many of the previous game’s mechanics. NBA 2K Playgrounds 2.

NBA 2K Playgrounds 2 requires a press and hold; it relies on timing and uses many buttons and combos that require players to press a series of buttons together. If you haven’t played it, here’s a video we put together to demonstrate the complicated gameplay.

So, who was the only game designer brave enough to take on the challenge of thinking through how a single-switch player could have a similar experience without all the button complexity? Amaury Français, a previous one-button design challenge winner for his Genshin Impact entry in January, was the only entry this month, and consequently, he has won a $20 steam gift card for his efforts.

Since Amaury has proven his chops as a game designer who is great at considering the player, and since he is a  two-time winner, our Playability Initiative designers held nothing back as they reviewed his entry and offered feedback.

Here is Amaury Français’ winning entry, along with our team’s feedback.

This document is about a one-button design for the game NBA 2K Playgrounds 2. The goal is to focus on playability and fun, using only one button, and thinking about accessibility, that is, removing any obstacle that would prevent people with severe disabilities from playing that game.

This document presents two design ideas, a small one that sacrifices some accessibility for great gameplay and another one that really focuses on maximum accessibility.

1. Characteristics of the game

NBA 2K Playgrounds 2 is a basketball sports game. It focuses on a very “street” version of the sport, where you can elbow your opponent, and there are only two players per team. It has a very fun focus, visible in the visuals with the big heads and the crazy dunks you can do. It is supposed to be a much more intuitive, fast, and enjoyable version of basketball, with less strategy (long-term planning) and more tactics (instant decision-taking), or just plain old button bashing to win, which is definitely a designed way to play the game. 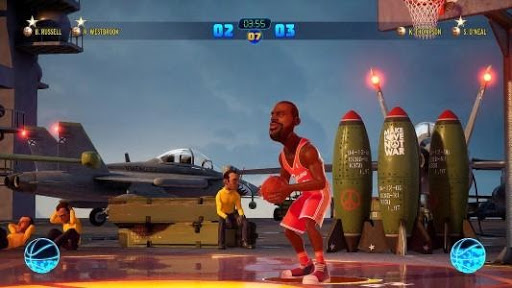 We want our players to feel the same emotions and the same experience as any other player when playing our one-button version. We want them to feel their hearts beat as they approach the basket for a dunk or get their ball stolen and try to take it back. Here is a list of features that define the core experience of NBA 2K Playgrounds 2, and we’ll try to reproduce as much as we can in our designs.

This is just a neat idea that sacrifices some accessibility. We’re not spending too much time on it, but it still feels very intuitive and fun, so here it is.

The main characteristic of Basketball is Dribbling. With only one button, it is easy to associate the idea of dribbling with the ball with that button press.

Sadly, this creates a demand for repetitive button presses, and a hold (to differentiate between dribbling and throwing the ball). But it could work for one button, using only one finger, or a foot, or even the tongue.

The idea is to associate the movement of the player with the speed of the dribbling.

This is the main design idea that focuses on accessibility and tries, as much as possible, to cater to any type of disability, with one button, not asking for too many repetitive button presses, and requiring no hold/release.

Since we cannot have a standard multi-directional stick, we need to find a way for the player to move around. In basketball, it is good to find a hole in the opponent’s team defense and to slip through their ranks to find yourself closer to the basket.

Our one-button designs contain an AI that will propose an ever-changing path that starts and ends where the player is. Along that path, a selector circle moves at a steady pace and passes through the other team members and, depending on whether you’re defending or attacking, your team’s goal or the opponent’s team goal and players. When the selector is not on a player or a goal, an arrow is visible from the player to that circle (to show the path taken if the player wishes to move there.) 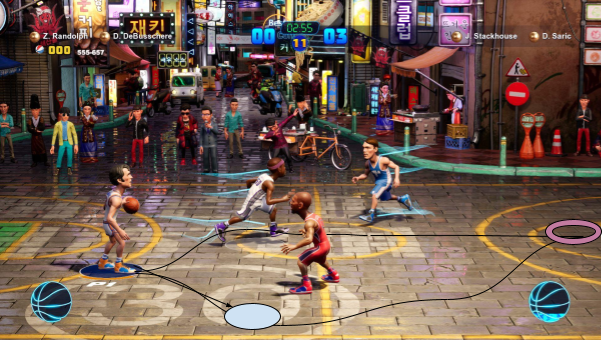 “This is my favourite suggestion of everything here! Using an AI-assisted route is an excellent way to reduce the input complexity but still allow for sophisticated movement. This approach could probably be extended much further, with AI suggestions of tactical opportunities, or interrupting AI control to suggest a previous tactic.”

When attacking, If you press the button:

“These attacking controls seem to do a great job of balancing movement and shooting. Some of the actions could even be combined, like a single option to move in and take a shot as soon as possible.”

When defending, if you press the button:

“Switching between broad policies of defence would help a lot to reduce micromanaging behaviour.”

Because of the time necessary to make a decision, the player’s speed should be increased compared to normal gameplay. We could also slow the game around the player, but this would be at the detriment of the fast and exciting environment of the sport.

Depending on the movements of the player and its team member, The AI path moves and changes but never “resets” so that the selector can always be present. The only time the selector resets is when you move from attacking to defending, or when you have the opportunity to elbow while defending (see defend chapter) 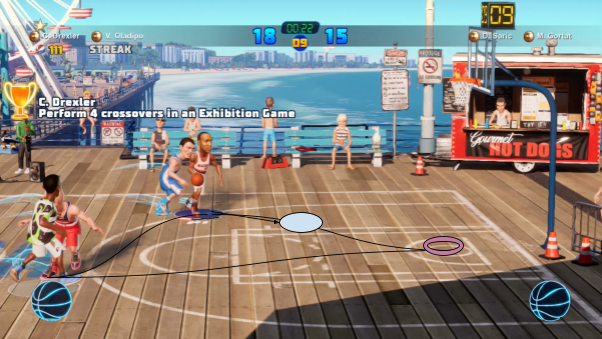 When you pass the ball, you don’t need to do any test; your character will send the ball to the opponent. If you make a pass while there is an opponent between you and your teammate, it is very likely that the opponent will steal the ball.

2. Defending from an opponent’s elbow/steal

When your character moves next to an opponent, that opponent can try to elbow you or steal your ball. In that situation, a button press QTE will suddenly appear. If you press it fast enough, you will dodge the attack. Otherwise, the attack succeeds. 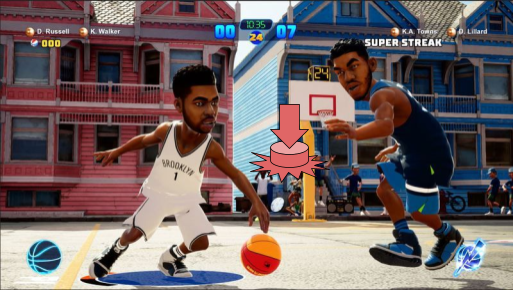 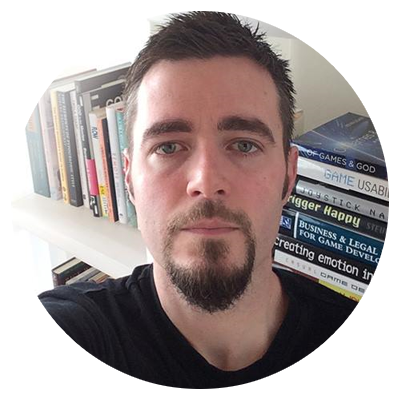 “This works if you’re playing single-player, but not in a multiplayer context. (I’m assuming that time slows way down briefly.)”

When you try to shoot the ball or dunk, (the choice is automatically made depending on your position), you will see the same QTE as the default gameplay, but instead of having to release the button on time, you will need to press it on time. The chances are similar to the normal gameplay. 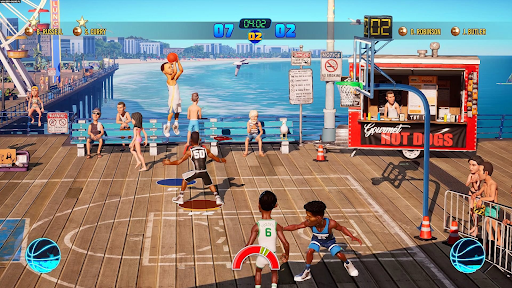 “This is probably an accessibility improvement, but it does require multiple button presses in a short period of time.”

When being close to an opponent that you can elbow, the selector moves automatically to that player for a small time, allowing you to select it to elbow it. If you don’t select that option, the cursor continues on its way. A visual cue also reminds you that pressing the button will elbow the opponent. 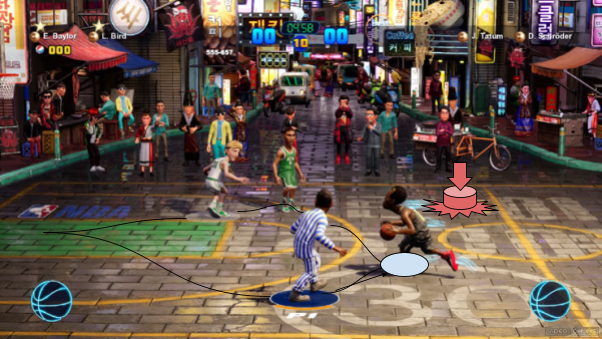 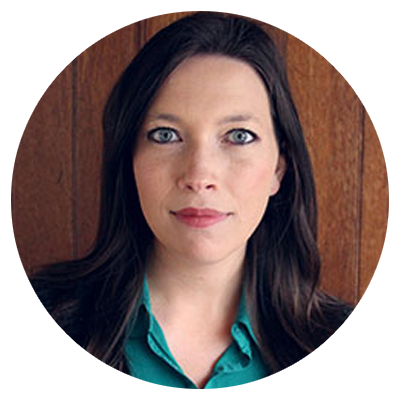 “I love these intuitive moments in one-button design, where designers anticipate what a player’s most-likely action will be and offer them the opportunity to take it quickly and efficiently, rather than pushing them through a tedious selection process of all possible actions. It really adds to the fun of the experience and the pacing of the gameplay. Well done!”

Protecting a throw works the same as shooting the ball. A small QTE, similar to the shooting one, will appear, asking you to press at the right moment. If you’re successful, you can block the throw or even steal the ball!

4. Difficulty parameters for even greater accessibility

Here are the different parameters you can change to make the game easier to play so that anybody can have fun with it:

1. Modify the overall speed of the game

This ensures a player will have plenty of time to choose their movement but can be at the detriment of the feeling of playing a sport in real-time.

2. Modify the speed of the player

If the player is fast, it can react faster to the decisions taken with the selector. This is probably the best way to make the game easier and not too punishing if you didn’t make a decision in the first pass of the selector.

3. Modify the timing necessary to protect from a throw/elbow attack

Reflex QTEs can be frustrating to react to as they’re sudden, so we can give more time for the player to react to them.

4. Increase the chances of throwing the ball

Again, this is to help with players who would have trouble getting the timing right.

“I love the idea presented here in numbers 3 and 4, about responding to the player’s ability. So perhaps if the player can not respond quickly enough to the QTE the first time, the QTE could give more time and be less specific the second time. It could keep adjusting down on each attempt until the player can successfully participate as intended. In general, QTEs can be quite difficult for one-button players with any motor control issues, so letting it adjust to the player over time is a way to even the playing field.”

We hope you liked this design and found it exciting! It seems like a great way to keep the fast pace and great choice span of the game in real-time while allowing for a single button.

We hope this helped you find some great ideas to add even more accessibility to games in the future so that anybody can play!

We love what Amaury said in his conclusion, and we agree that all along, our hope has been that the one-button design challenges both sharpen our skills as game developers but also that they inspire new ideas and awareness in other developers and studios. Accessible game design is not impossible; it just takes a willingness to consider the player, prioritize accessibility early in the process, and a little creativity.

Our accessibility challenges are posted on the first Friday of every month. If you would like to participate in our next one-button design challenge for a chance to win a $20 Steam Gift card, join the Playability Initiative Facebook group and watch for the announcement of the April challenge, coming this Friday, April 2nd.