A memory from seven years ago popped up on my Facebook feed. It was a video of my son walking. I watched it twice with the sound turned all the way up – absolutely captivated. Watching the video, some people may find themselves focusing on all the things he could improve on. Some might feel pity. A few might even watch his clumsy efforts and say to themselves, “what a shame.” His gate was uneven. His steps were clunky. His balance was precarious. But when I watch it, all I see is everything Joel was able to do.

I see a little boy who learned to walk with a tiny gold walker, a boy who took his first steps at the age of three. He often gripped his shirt tightly in his fist as he walked, because he was so unstable on his feet that he needed the security of having something to hold onto. Even if the security he sought was an illusion. He didn’t just learn to walk once. He learned to walk several times after tumors put pressure on his spinal column, and the pain stopped him in his tracks.

This video, in my “memories feed,” captures the first steps we’d seen him take in three days. We had been preparing for a road trip, a precious luxury after years of cancer treatment that kept us tethered to the hospital, never more than an hour away from the help Joel might need. But while he was terminal, we didn’t have active treatment to consider, and every now and then, we could whisk the children off on an adventure if Joel was doing well. He had just finished a series of radiation treatments. We couldn’t wait to escape. But we had begun to notice issues we tried hard to ignore. Was Joel walking a little less? A subtle wince shifted Joel’s eyes anytime he moved around. He fell after a few unsteady steps – not surprising, but not reassuring. And then two days passed without Joel taking any steps at all. Sometimes with cancer, you know before you know. Neither my husband nor I wanted to be the first one to question if we should cancel our plans.

But on this beautiful day, he rallied. All the worst case scenarios we tried not to imagine were chased away by the sight of our son up on his feet, exploring the neighborhood. And so I press play again. I watch his clompy feet stomp. I listen to his giggle as he “runs.” I remember the trip we didn’t have to cancel – the ribs we ate at a roadside bbq restaurant, Joel’s brothers jumping around on hotel beds as he laughed, not quite able to join in the fun but adding his merriment to the mix, and I remember Joel, climbing every step at the Lincoln memorial, as he held my hand, with fireflies beginning to light up the sky. The holiness I felt inside that sacred space mixed with the gratitude I felt that I had been allowed to witness this boy take each daunting step to the top. 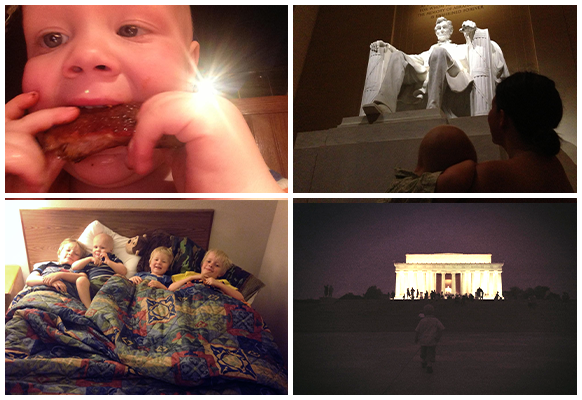 I play the video again, and I notice how Joel barely negotiates the curb, carefully managing his balance. And then he puts his hand on his head for a moment. Why? I wonder now, as I consider him and all he managed to do. Did his head hurt? Did he feel dizzy? He couldn’t tell me. He never spoke.

There was so much he couldn’t do. But we focused on all the things he could do because every ability he displayed resulted from a hard-won battle. Every shaky step was a victory.

Today, we are announcing the Playability Initiative at Games for Change. It’s an initiative that has our whole heart because it allows us to focus on the abilities of children like Joel, who may not be able to leap and run and dance and sing, but we know that everything they can do is a precious gift to the people who love them. We are designing a video game for “the one.” The one others may not see. The one that may get brushed aside so we can serve the majority. The one who the shepherd might leave the 99 for. And what if this one can only move a single finger, ever so slightly? Can we imbue meaning and joy and connection to that child’s ability? We can. We just have to be willing to consider them, to see value in their abilities, and believe they are precious enough to warrant our efforts. Because of Joel, we see all of these “ones,” and we don’t think, “what a shame,” we think, “look at them go!”