It’s no secret that we love seeing the creative ways our community responds to the monthly one-button design challenges. In February, we wanted to tackle a truly challenging aspect of one-button design: navigation. Making choices with one-button can be pretty straightforward, but when a game is known for really fun player navigation, how can they consider their one-button players without sacrificing the style and fun?

When our February winner Quentin Deberdt and honorable mention Ian Hamilton, submitted their designs for how to make the Spider-Man web-swinging mechanic a one-button design, they both went above and beyond in making sure that the resulting gameplay still felt as epic and cinematic as the original gameplay.

Here are their designs, along with the feedback from our Playability Initiative Game Designers.

We’ll begin with Ian Hamilton’s entry. February was Ian’s second honorable mention recognition in a row. We love that Ian lays a great foundation for accessible design with a unique nod to style and fun.

“Auto swing in the current direction on initial press, on any further presses rotate left/right looping around 180 degrees to choose a new direction or stop, on a configurable speed. Rather than the game pausing while choosing a new direction, enter into extreme slow motion, with spidey’s head/body animating according to the directional scanning; rather than an accessibility accommodation, this would feel legitimately like you’re using his superpower speed and heightened senses. Like this, https://www.youtube.com/watch?v=0ROSj2V45-g but quite a bit slower again, so no meaningful forward distance is traveled while choosing a new direction.”

In reviewing Ian’s entry, Mike Perrotto said, “I love the slow-motion idea.  Probably even slower than what is in the example video.  Perhaps more like Final Fantasy VII: Remake when making ATB choices.”

Amy Green added, “Letting Spider-Man’s head and body show the loop rather than putting in icons does a lot to keep the aesthetic really nice for players with disabilities, and I like the concern shown here for not giving players who are using the one-button option a less visually appealing experience.” She continued, “Often accessible design suffers from feeling “less interesting” than the mainstream design. I love that this extreme slow-motion approach adds a stylistic and thematic element to the design that would make the one-button mechanic feel like a special effect that puts you in the mind of Spider-Man rather than simply feeling like the gameplay has halted or is accommodating you.”

Quentin Deberedt’s entry was quite creative. It incorporated a lot of the elements that make Spider-Man such a popular game franchise, and he communicated his ideas really elegantly despite English not being his native language. Here is his entry:

The web swinging gameplay of Spider-Man and Spider-Man: Miles Morales is rooted around 3 pillars:

I keep in mind these pillars while designing this proposal.

Note : I only played the Spider-man game on PS4 and have seen only a little of Miles Morales gameplay.

For the following, we stated that the player has already triggered the web swinging gameplay (the first push on the button) whatever was the initial state of the avatar : Jumping, falling, using a burst…

We will also make a difference between exploration state (or free roam) and missions state. (Mostly pursuit)

After the start of the web swinging gameplay, the avatar goes toward a marked objective on the map or just in the direction of the camera.

The goal of the following mechanism is to represent Spider-man’s ability to be aware of his environment and to offer an alternative to a simple rotation system.

At any time, the push of the button triggers a high slow motion mode where the avatar’s current movements have no incidence. (In any case, we can freeze the movements after multiple minutes)

During this slow motion, a “scan and select” interface appears. It cycles automatically (the speed can be set in the accessibility menu) through highlighted points of interest (POI) around the character, the camera turning around Spider-Man to show them.

These POI can be :

The player just pushes the button on the highlighted POI he wants to be guided to. 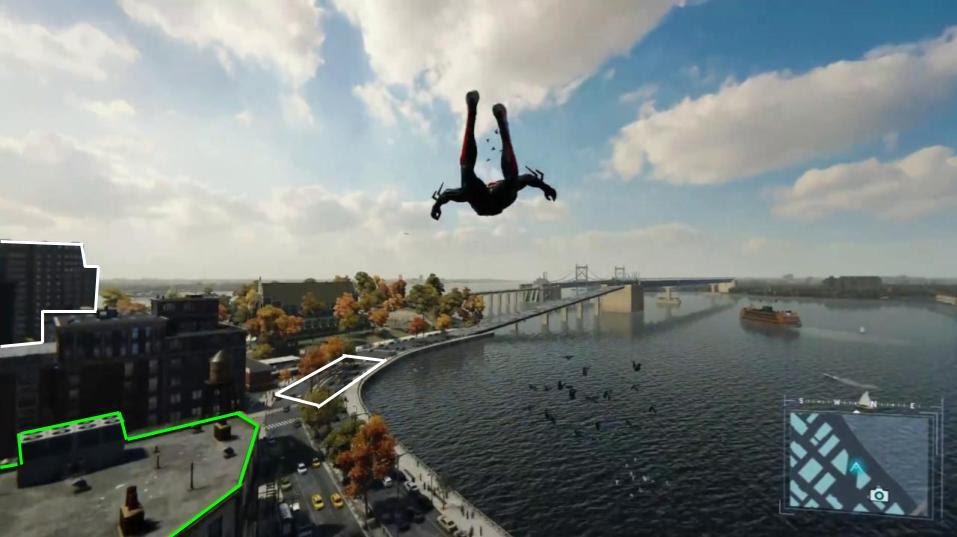 At the end of a cycle, the avatar is highlighted which prevents any change of direction if the player pushes the button at this moment.

The navigation during missions or pursuits is different. The game is more dynamic and the player has, most of the time, a clear information to where to go.

In that case, the exploration system isn’t as relevant and the direction can be set automatically by the current objective.

However, we would miss the opportunity to give the Spider-man experience by letting the controls on fully automatic. This is why I propose a pace system.

When the player pushes the button, a “scan and select” interface appears and the high slow motion mode is triggered. But this time, the interface cycles automatically (speed can be set) through icons that just appeared on screen. 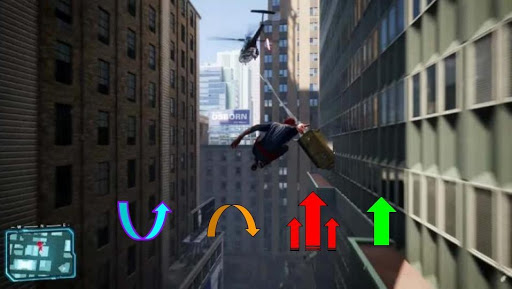 When the avatar is close to his objective, the “triangle” action is automatically triggered in order to help the transition between the swinging gameplay and the next gameplay state.

I imagine others possibilities that could be turned on or off in the menus.

Here is our feedback on Quentin’s design, broken down into the categories he presented:

For web-swinging in exploration mode, Amy Green said, “I really appreciate offering a variable speed for scan and select.”

Mike Perrotto said, “I love the idea of using Points of Interest or player indicated markers to control core locomotion.  In our own design research, we have found that the destination is what we tend to think about more than each individual choice.” Amy agreed, adding, “POI-based rather than navigationally-compass based makes a lot of sense, because the player can use these POI to navigate, but a vast majority of the time they are traveling to a specific location, so letting them choose a destination and not just a direction makes a lot of sense and cuts down on the number of steps a player must take to get to their desired outcome!”

For web-swinging during missions, Amy said, “It makes sense to assume the player’s destination during a mission and to get them there as efficiently as possible to not add to player frustration, and I love that you use this time to allow the player to choose their pacing and style of swinging, since this is a core part of the fun of swinging as Spider-man, and the perfect opportunity to surface it!”

Mike added, “The pace system idea is very intriguing, and it harkens back to game systems like Final Fantasy XII’s Gambit system and Final Fantasy XIII’s Paradigm system.  Having a general approach to an obstacle or encounter to influence your basic move-set and then the player can focus on flourish and details.”

For other features, Amy said, “This approach of getting the key information settled first…”what is the destination” and then allowing exploration in style and pace really lets the player using one-button mode experience the parts of Spider-man swinging that make it such a compelling navigation system.”

Once again, we are so encouraged to see the thoughtful, creative work that our community puts into these monthly design challenges. We hope we are setting an example together of how easy it is to consider players who have unique limitations in how they can play. Our goal is to help more developers think accessibly from the very beginning of their game development process. As we practice this together each month, we learn from one another and grow in our resolve.

If you’d like to participate in the March one-button design challenge, join the Playability Initiative Facebook Group. We will announce the contest on Friday, March 5th, and the winning entry will be awarded with a $20 Steam gift card.