This week, Jack wrote a blog for the Playability Initiative telling everyone why he hates timers in games. Players like Jack can find themselves artificially barred from the fun when a timer interferes with their play experience. 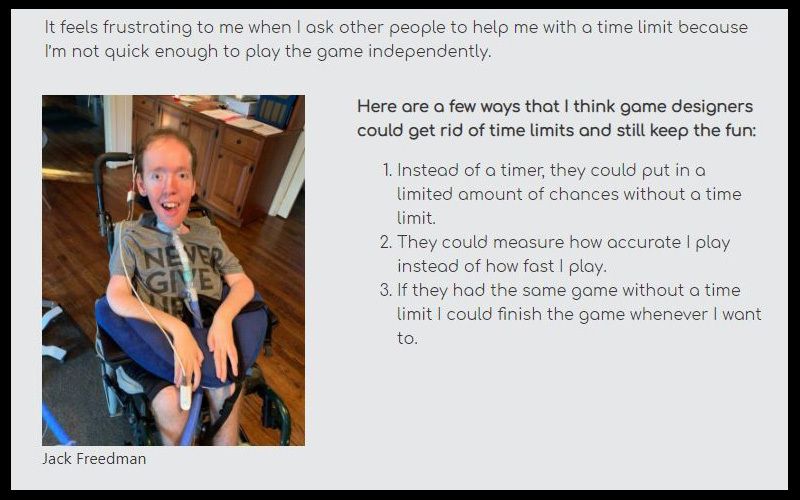 In a world where physical environments often exclude people who have limited mobility, video games have the potential to open up the fun to everyone. Design choices that do not consider the abilities of the user may needlessly create an impassable barrier.  Design is all about who you consider. It is important for designers to ask questions like, “Who am I making this for? How do they interact with the world, and how can we make them comfortable?” As we design Painted Waters, we are asking ourselves these questions.

Many games require the player to react quickly to the events on screen, and if instead the player reacts slowly, their reaction is flagged as a mistake. We aspire to create a game that is just as much fun for players with slower reaction times as it is for those who are able to respond quickly.

For Part One in this blog series, we will show you one style of cycling options for players that we are considering. We’ll be illustrating these principles using napkin sketch animations. In Part Two we’ll share how we’re adapting these principles to the design of levels and features in Painted Waters.

Some players are physically unable to use traditional gamepad or keyboard controls. These players may rely on buttons or levers that they control with their hand, mouth, or eyes. These controls are known as Switch Access.

To accommodate this style of input, the game can present the player with a set of choices.  The player can cycle through the choices, and activate their switch to select their desired choice.  This process can take a long time, especially with a large number of choices. In the following examples, we’ll share some different cycling patterns we are considering when designing our game.

Example One: The Automatic Cycle

Automatic cycling means that between the three choices presented here, the banana, the apple, and the cake, the game will automatically rotate the frog to point at each choice after a given amount of time.  When the frog points at the choice the player wants, they hit their switch to select the cake!

Pros to The Automatic Cycle:

Cons to The Automatic Cycle:

Example Two: The Automatic Cycle with Increasing Time Between Choices

This Automatic cycling with increasing time between choices is almost identical to the previous method, with one variation. The longer the player waits, the slower the choices cycle.

Pros to The Automatic Cycle with Increasing Time Between Choices

Cons to The Automatic Cycle with Increasing Time Between Choices

Manual cycling with 2 switches means that the player uses one switch to cycle between choices, and another switch to select their desired choice.

Pros to The Manual Cycle with 2 Switches:

Cons to The Manual Cycle with 2 Switches:

Manual cycling with one switch allows a one-switch player to select their desired choice reliably, by only switching choices when they activate their switch, however it can reintroduce time pressure on the player because if the player does not choose to cycle to the next choice by pressing their switch before the timer runs out, the system assumes they are making an intentional selection of the current choice.

Pros to The Manual Cycle with 1 Switch:

Cons to The Manual Cycle with 1 Switch:

The undo is an option you can add to any of the above methods to make sure the player is able to correct their choice, if a mistake has been made.  A built in undo within the game gives the player the opportunity to go back and select the choice they desire.  In this animation, there is still time pressure to click at the correct time, however if the player activates the switch at the wrong time, they can activate the switch again to select the other option before the Undo timer expires. To finalize their choice, they have to push the switch  to select their choice and then wait for the undo time to expire.

Pros to the Undo:

Cons to the Undo:

Eye Gaze players have the benefit of quick reflexes. Our eyes can move fast! However, players typically can’t play as fast as they move their eyes.  Just looking at something on the screen doesn’t mean they want to move their avatar, or attack an enemy on the screen. The game needs to know what the player intends to do with their eyes.

When designers don’t think about the time it takes for a player to comfortably input what they want to do, then game design can penalize these players or leave them out.

In Jack’s case, he had to move a cursor a little bit at a time across the screen using buttons like the ones represented in the image above. Then, he had to look at a different screen to determine if his mouse was in the correct location for what he wanted to do.  For a timed mini-game, it didn’t matter that Jack knew how to play and knew how to solve the puzzle, the time limit didn’t wait for Jack’s eyes.

In Part 2, we’ll share with you some of our design considerations for reducing timer dependency in the action and movement of the game. We’ll also discuss how our level design and game play consider those who need additional time. We want to make sure that Painted Waters is fun for everyone to play together.