We’re Learning that Accessibility begins and ends with people, not features…

Jack wanted to play a racing game. But all the ones he’d tried on his PC required elaborate controls. We couldn’t call ourselves the Playability Initiative while letting our collaborator, Jack, be disappointed with his ability to play, and do nothing about it. So we set out on a path to find a racing game Jack could play. And what we learned along the way is that gaming accessibility is never a “one size fits all” solution.

Jack plays video games with his eyes using a system called Eyegaze. He told us that he could only reliably play games that used mouse-only input. We began looking for mouse-controlled racing games.

Our first attempts were rocky. Someone on Twitter suggested Mindball Play. We’d heard it had fast-paced racing-style mechanics. (Even if you were racing a steel marble around a track rather than a shiny red race car.) Most importantly, it was designed with eye gaze users in mind, so it should be an easy win. Jack was excited to try it. However, he told us,

“It was hard for me to learn because I couldn’t move the cursor fast enough for me to keep up with the ball on my laptop. I got stuck with trying to navigate the ball with my eyes on the laptop.”

Jack couldn’t play it. So, he and his dad returned the game to Steam. (We had just told them about Steam’s policy that allows players to return any game played for less than 2 hours. This policy meant they could try out games without the fear that they’d be out money if the game wasn’t accessible enough.)

Now we were puzzled. Why couldn’t Jack play this game that so many people had praised for being a really good eye-tracking video game? We started a conversation with the creators of Eyegaze. We didn’t want to reinvent the wheel. Maybe they already knew of some racing games Jack could play?

The creators of Eyegaze let us know that every user has a unique configuration set up that enables them to do the things they like to do most. Some systems are set up primarily for word processing, others are set up for gaming, some users even create special configurations for specific games. They let us know that Jack’s configuration was better suited for office work than playing games. Jack used a grid system on a secondary screen to move his mouse on a primary screen. Each micro-movement of the mouse required Jack to “click” (with his eyes) a section of the grid on the secondary monitor. 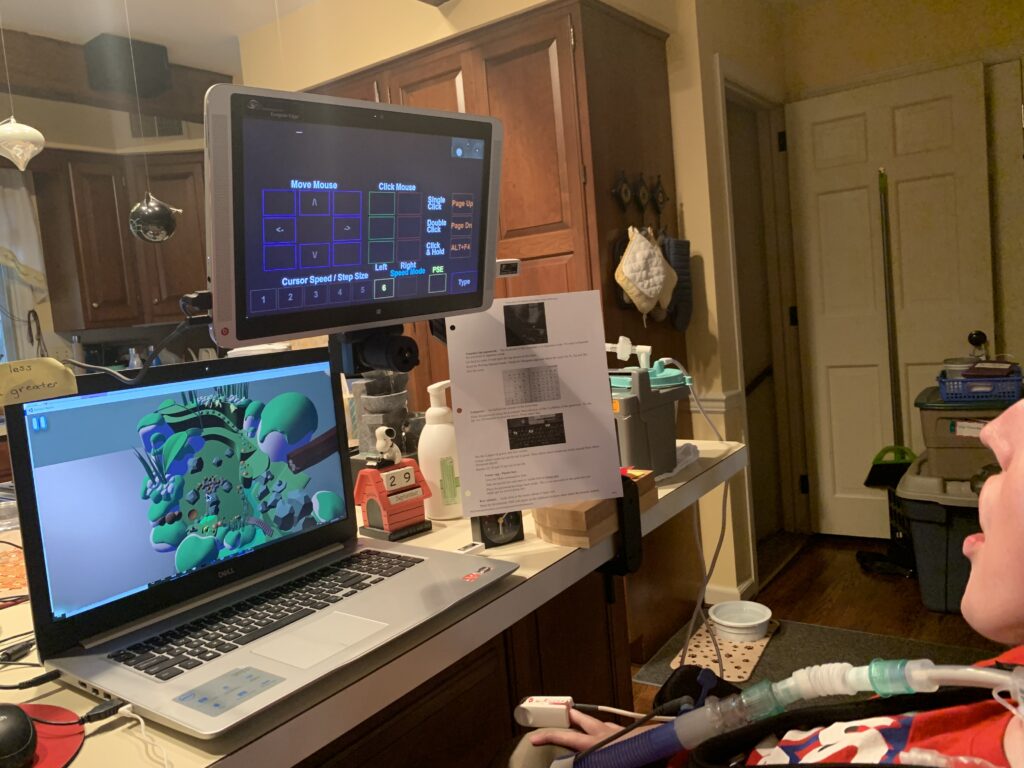 We realized that some of the problems that Jack had playing games had less to do with accessibility systems in the games themselves and more to do with his personal configuration setup on Eyegaze.

Jack’s dad, Al, explained to us that these systems are complicated and they can feel a little overwhelming to people who aren’t familiar with technology. Al surmised that most parents, like him, probably think to themselves, “If we change the settings, we might break something and not know how to change them back.” So, when an expert set up Jack’s system, Jack and his parents tried to leave it alone.

So even though software like Eyegaze is highly configurable, finding the right configuration for every type of activity on a computer is daunting. And for many people, making due with a less than ideal configuration is better than changing a setting and rendering their computer useless to them. Al also let us know that Jack is a creature of habit, trying to change his system could require relearning habits that have taken years to refine.

We realized that this was the perfect education for us. We couldn’t just make a game designed to be accessible and trust that everyone would be able to experience it. We had to consider each player, and make ourselves available to talk with them about their setups, one-on-one if necessary. So, “Help Jack play a racing game,” became our primary learning objective.

First, we had to ask Jack if he’d be willing to let us try changing some of the settings in his Eyegaze system and experiment with new ways of using his computer, if it meant he could try out different kinds of games. Jack loves games, so he was motivated.

In our conversations with Eyegaze we learned that the device running his eye tracking software was itself a Windows tablet capable of running games.

So we tried running Mindball Play on his windows tablet. At first, this seemed to fail also, the game did not run very well on this tablet which also ran the Eyegaze control software. Eventually we realized that between the eye tracking technology, Zoom screen sharing, video conferencing, and trying to run the game all at once, we were bogging down the computer speed, and it couldn’t keep up. So we simplified. Instead of having Jack share his screen over Zoom, Jack’s dad Al, signed into Zoom on his phone, and pointed the camera at Jack’s screen.  Now we could see the game running smoothly and keep troubleshooting without bogging down the system.

Next, we focused on finding a way for Jack to control the mouse easily.  The default configuration for controlling the mouse was better suited for pointing and clicking. What we needed was a way to control the mouse pointer and *not* click.  This behavior would be essential for steering the marble in the direction he wanted it to go.

Trying to find a configuration just right for a player is an exhausting and frustrating process.  Not only do things not always work, but we were constantly asking to take control of the computer away from Jack remotely. This is a very invasive process and it requires a great deal of trust from Jack. We knew that the stakes were high. If we made a change that we couldn’t fix, we would be cutting Jack off not only from his gaming pastime, but also his social and work life.

All the failed experimentation was frustrating and tiring to Jack.  And it wasn’t something we were able to solve in one session.  But thankfully, Jack was patient with our inexperience and after learning more about the existing Grid 3 software that was already on Jack’s machine, we discovered a setting that would allow Jack to switch between his default “point and click mode,” and our desired “move the cursor” mode we needed only while he was playing the game. 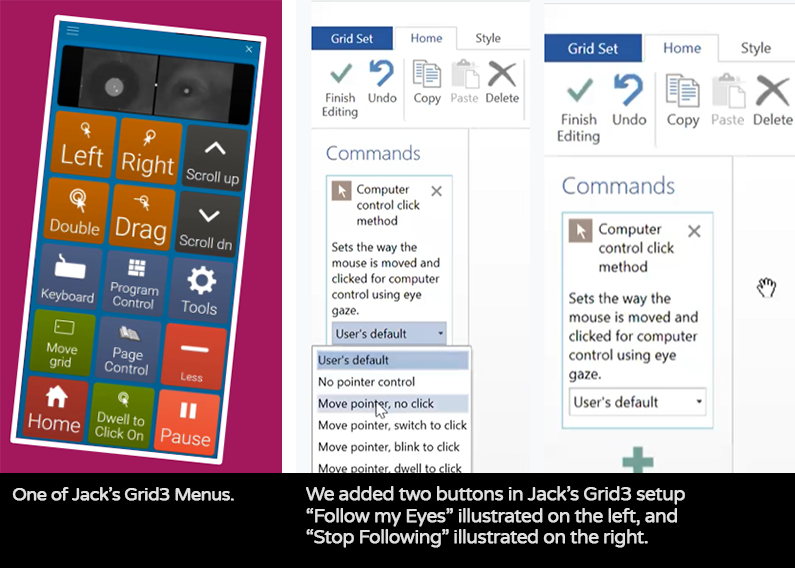 We asked Jack about his experience with us changing the settings he typically uses to play games and here’s what he told us,

“To play Mindball Play for the first time, I had to use Grid 3 on my Eyegaze to click or navigate my mouse. Now I have a new thing on my Eyegaze Grid 3 called Follow my Eyes for navigating or clicking with my Eyegaze. Following my Eyes helps me to navigate the ball more easily with my eyes.”

He went on to tell us,

“I was curious about how Follow my Eyes works. It took me some time to figure out the steps. It was easier for me because I can be more quick about following the ball in the game. I was glad I stuck with it.”

We loved watching Jack get to play a fast-paced game. And he, like most men in their twenties who enjoy playing video games, seemed to enjoy having an audience watching him play as he zipped around the course. Before this, he had stuck to mystery games which he could enjoy because they typically don’t rely on quick reaction times, although even these games occasionally had timer-based levels that presented problems. Fast-paced games had seemed out of reach for Jack, but after we helped him adjust his settings, he was cruising.

“The stuff that I like the most about Mindball Play is that I’m able to move the ball down the path because I don’t keep falling off and the game is longer. I’m quick enough to navigate the ball with my eyes!”

Of course, no game is perfect, and Jack told us that if it were up to him, he “would try to adjust the speed of the ball to make it go slowly and not too fast.” But, even with that small criticism he could see himself recommending the game to others.

“The player that I think would enjoy playing Mindball Play would be other Eyegaze users like my friend Amber from Vent Camp.”

We wanted to know if we had succeeded in our goal of helping Jack play a racing game. Did Mindball Play count as a racing game in his mind? He told us,

“It does feel like a racing game to me.” But he also said, “There are other racing games that I would like them to make easier for playing by using the mouse and not the keyboard (Train Simulator and other car racing games).”

So the push for more inclusive-thinking in game design marches on.

As we keep learning from Jack, we’re identifying new priorities for the Playability Initiative and our one-button game, Painted Waters. First, we want to make sure that we offer some fast-action areas of Painted Waters where kids can experience the thrill of speed with one-button controls that aren’t dependent on quick responses. And second, we want to prioritize one-on-one help for players who need guidance on adjusting their gaming setups. Accessible games aren’t enough, each player has unique personal needs that may have to be addressed. And that’s one reason we’re so excited about the work that AbleGamers does to analyze a player’s needs on an individual basis. We are honored to partner with them to help Painted Waters reach the widest audience possible.